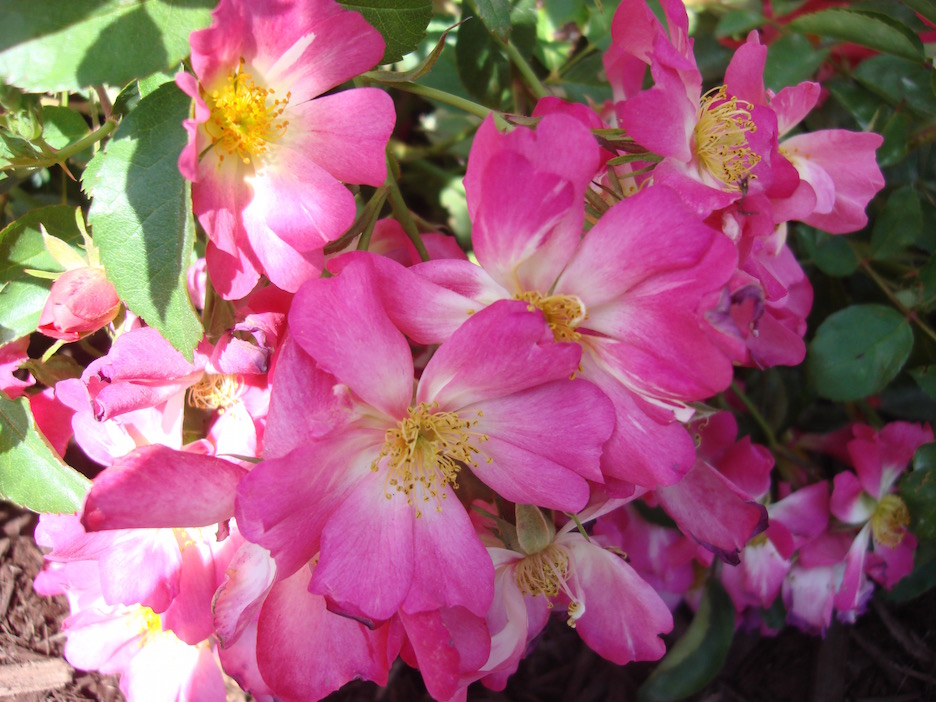 About 3 years ago, I saw a gorgeous ad for Drift roses as a rose hedge.  I decided then that my boulevard could become a garden with a rose hedge - it soon was on my ‘bucket list’.

And 3 days ago, I found these glorious Drift roses - “The Pink Drift Rose”. My vision was about to become a reality. 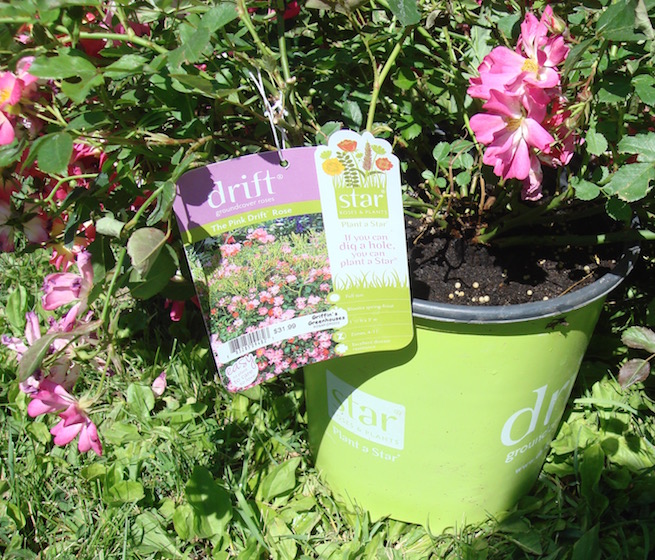 But my boulevard had some issues; we had already planted two dwarf apple trees there, moving them away from the Black Walnut in the back garden and the soil was hard-packed clay, gravel and sticky goo when wet.  Ugh.

Planting day was 30 C. (86F) - hot and sunny - but the roses needed planting… too long in their pots is not conducive to good growing conditions for those tiny roots- it slows down their root growth.

I dug the first of three holes down about 6 to 8 inches and could not get the shovel through the next layer… no rain for  a few weeks didn’t help, so I filled the hole with water and let it sit while I sat and took a hydrating break before digging hole number 2.

When the water seeped away, about 20 minutes later, the bottom of the hole was sticky mud filled with debris: asphalt (it is a boulevard, remember?); small,  medium and very large stones.  I piled that muddy mess in some bins, separate from the top layer of soil I first removed. 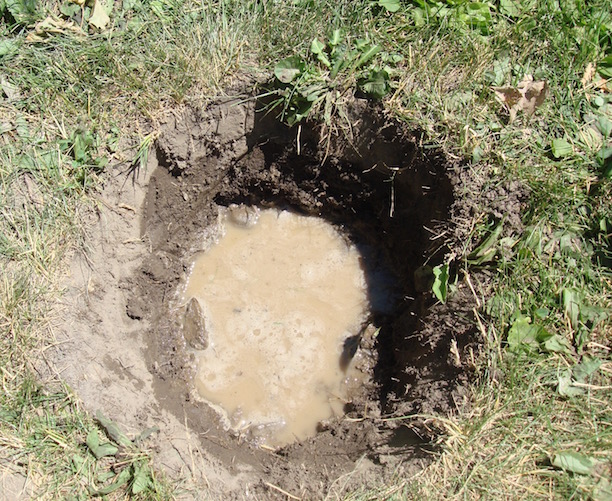 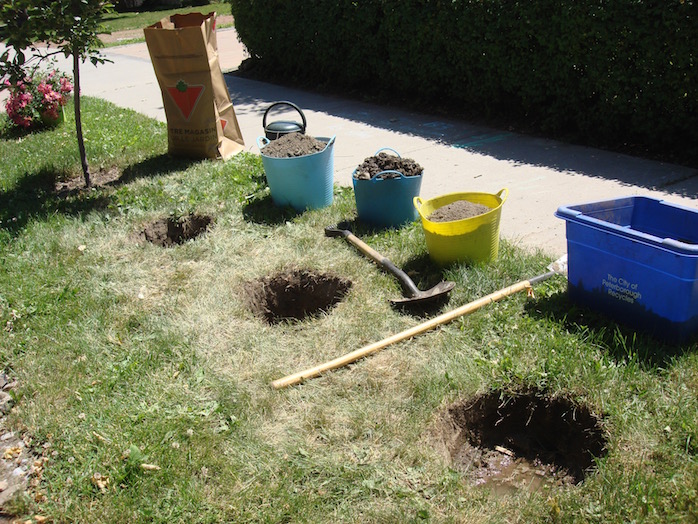 I dug the hole wider and deeper than I needed, so there was space for some compost to mix in with the original soil. I don't usually add anything to the soil when I plant, but because I removed a lot of debris, I didin't have enough of the native soil to put back, so I did add compost to the original soil.

It's important for any plant to be put into the soil it will be expected to grow in. Harsh as that sounds, if you only fill the hole with compost, the plant roots will never move beyond that rich soil... why would it bother when all the nutrients it needs are right there?

Every plant needs to form roots strong enough to find its own nutrients by extending further and further beyond the edge of the original hole.

I removed all soil from the potted rose and wash off the roots, trimming off any broken or damaged roots.

If the roots were very damaged or the rose was purchased late in the season having sat in the pot for at least one season... I have added a product called "Myke" around the outside of the hole.  It is a mycorrhizae (or fungi) which are essential to root growth.

There is conflicting opinions about adding Myke but decide to add only if your research shows a definite need.

This product is best  used by sprinkling a handful of the dry powder around the inside of the planting hole.

The grey spots in the photo below are the “Myke” granules/powder.

Next came actually planting the rose from the pot into the hole and adding the mixture of soils all around the edge of the plant, tamping it down to remove air pockets. Make sure you do this... 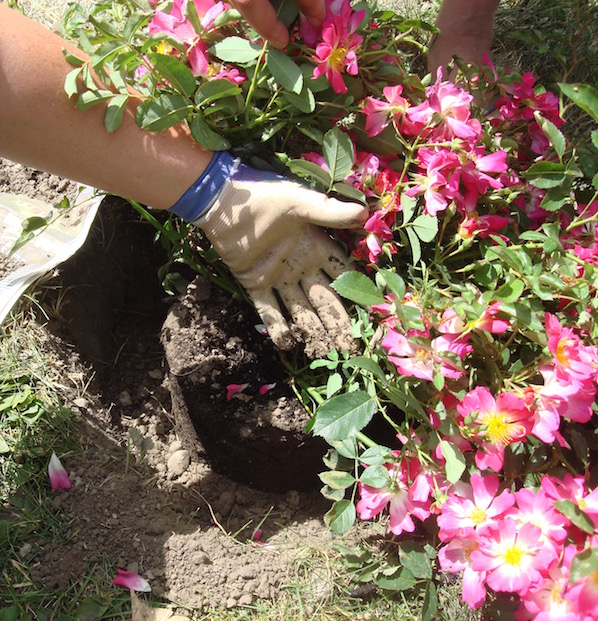 I don't use a fertilizer when planting roses.  In fact, I have not used any fertilizer on my roses for the past 2 seasons.  I see it as making them dependent on it.  And I want them to search for nutrients in the soil.  I do add a layer of compost on top of the soil in spring and fall so the rains filter it down through. Not fertilizing doesn’t mean not feeding them…. good, healthy soil is full of nutrients and that comes from rich compost.

But back to my rose hedge on the boulevard.

Because there is also a grass strip,and it gets mowed, I didn’t want the mower to cut off the blooms.  The Drift Roses are low growing and some of the branches trail along the ground - which is why this rose is also great for the edge of a stone wall.

So I added a strip of thick newspaper on top of the grass. With no rain for a few weeks, the ground is brittle and hard and removing the grass would have been a silly task…. I took the thick, gooey “dirt” and gravel from the bottom of the hole, and spread it on the newspaper.

Again, lots of controversy over doing this too. The reason being if the paper dries out, water runs off and does not soak into the soil.  So if you are going to use this, you have to be diligent about keeping it wet until it begins to decompose.  For me, that took about a week as the layers were only a few thicknesses. 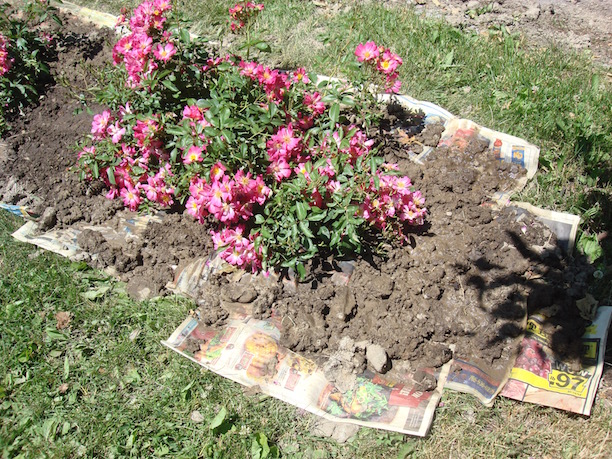 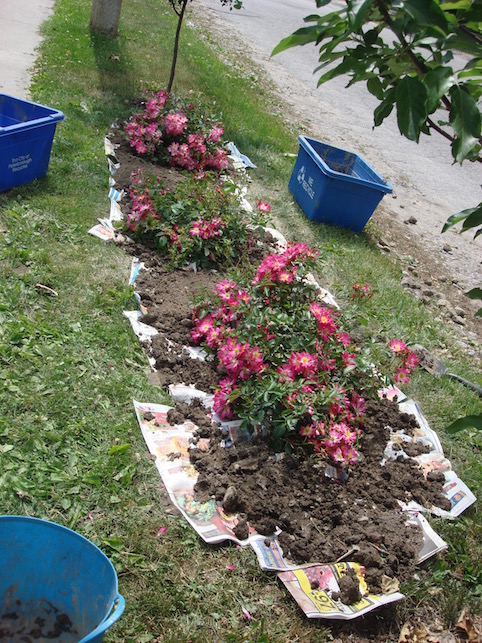 The idea is to make the the rose hedge look like a bed, without digging one, but most importantly, adding mulch keeps the soil moist, covers the newspaper and creates rich soil over time.  It also gives "the mower-man", a visual line to follow so he does not run over the roses.  Egads... 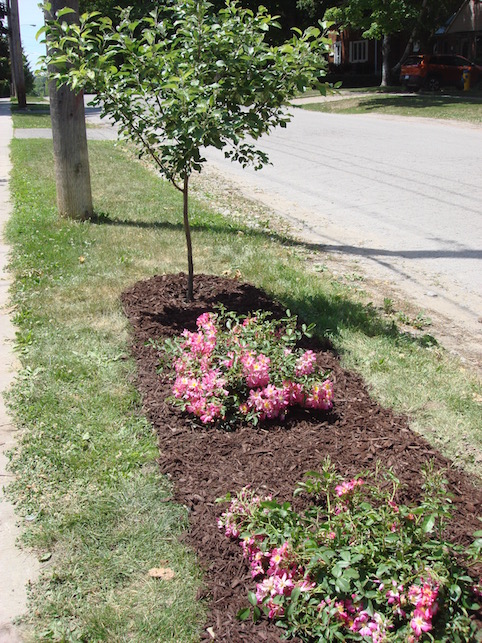 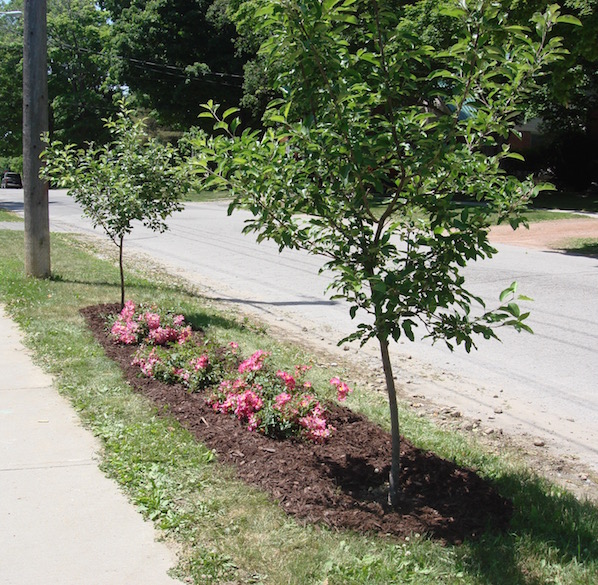 and... last but never least.... water deeply - and then, if no  rain, water every day for a few days,  then a couple of times a week until the rose has a chance to establish.. let them dry out a bit between watering, but never dry enough so the leaves are crispy.... the roots will suffer...

I wonder if my new rose hedge will deter folks from picking my apples?

It is now September and we have had a summer with incredibly difficult drought conditions. More severe than most of  us can remember. As we are on metered water in our city and restricted watering, I was very careful of the water used.... but planting before the drought, I had no idea the summer would be so hard on plants.

I watered the roses by hand, and twice as often as I would have in normal conditions, and they pouted for a few weeks.  The blooms dropped off, the leaves began to curl and even the weeds did not come up.

It is now much cooler.  The nights are cool and although the sun is still hot - the mean temperatures are no longer mean.

All of a sudden, two weeks ago, new buds appeared. And this week, blooms!!  Not as many as in the photos above, but blooms nonetheless.  Gorgeous.

And a few weeds have popped up through the newspapers and mulch but they are easy to pull.

I would say, in spite of the drought, they are doing well.