What's the difference between dirt and soil?

I’m not sure about you, but my hands are “dirty” when I come in from the garden…. not “soil-y”.

But it’s no secret that dirt is pretty much dead soil.

So here’s the thing:

“Dirt” is made of Clay: (tiny particles about the same size as bacteria);

However, Soil is pretty much the opposite. Besides having all the same stuff  as ‘dirt’, soil is full of living things like decaying organic matter, microbes, bacteria, fungi and microorganisms.

Soil has been considered -  until recently - an undervalued resource… because it is not an easily renewable resource.

Scientists warn that we are depleting the soil much faster than it can replenish itself.  It takes about 500 years to replace  as little as 25 mm (1 inch) of topsoil that is lost to erosion.

This means that good, fertile soil is a non-renewable and endangered ecosystem - ouch…

WHAT IS HEALTHY SOIL?

The Food and Agricultural Organization of the United Nations (FAO) wants us to understand the importance of healthy soil, so here's some 'dirt' from them:

“HEALTHY SOILS…. are the foundation for food, fuel, fibre and medicine”.

There are more organisms in a teaspoon of soil than there are people on earth.

Healthy soil holds more water and therefore, loses less water to runoff and evaporation; both of which lead to erosion.

Healthy soil is hidden from plain sight because it is covered up.

So how do we get healthy soil? By covering it up.

Covered crops keep roots alive and create a universe of microbes, mycorrhizae, fungi, and bacteria  which are all necessary for pest and disease resistance and allow the soil soak up and hold water, while making sure all  essential nutrients get to the plant roots. 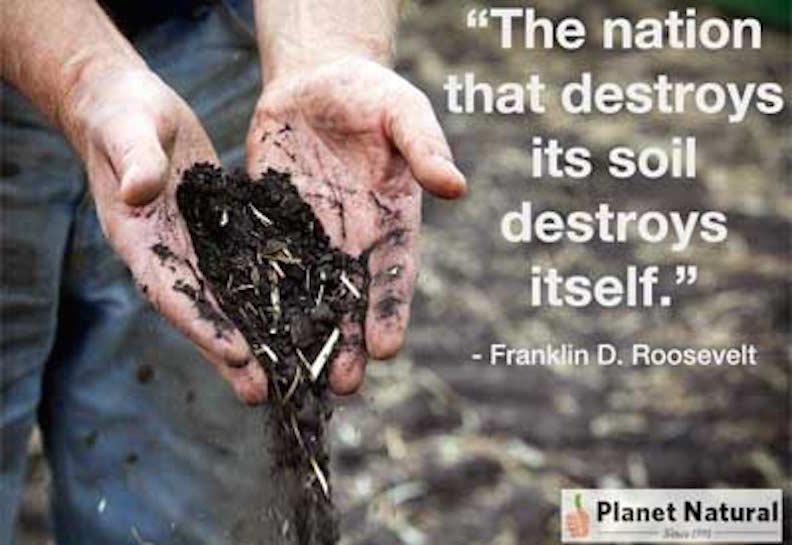 WHAT IS UNHEALTHY SOIL?

(read about the toxins in soil under the Black Walnut Tree.... )

NAKED is unhealthy - for soil that is…. Bare soil lets water run off, creating erosion and nutrient deficiency. Bare soil is dysfunctional - it is naked, hungry, thirsty and running a fever.

How does it get that way?

Tilling agricultural land produces naked soil for at least half the year. After crops have been harvested, usually the land lies pretty well bare for the other half of the year- all the while, blowing away, eroding and heating up.

Bare soil loses carbon through deforestation, tilling, burning fossil fuels and using herbicides and pesticides. When soil loses carbon and is exposed to air, it becomes a gas - Carbon Dioxide (CO2) - one of the gases affecting our climate.

Without carbon in the soil, the microbes dependent on it, are lost and the soil becomes - dirt.  Dead soil.

There is more organic carbon in our soil than in both vegetation and atmosphere combined…. actually, there is over 300% more carbon stored in the soil than above it.  Wow….

Plants draw carbon out of the air through photosynthesis and form carbon compounds. If there is more than the plant needs for its own growth, it is emitted through its roots into the soil to feed other organisms, affecting soil structure and fertility.

This cover-crop below will protect the soil from erosion. 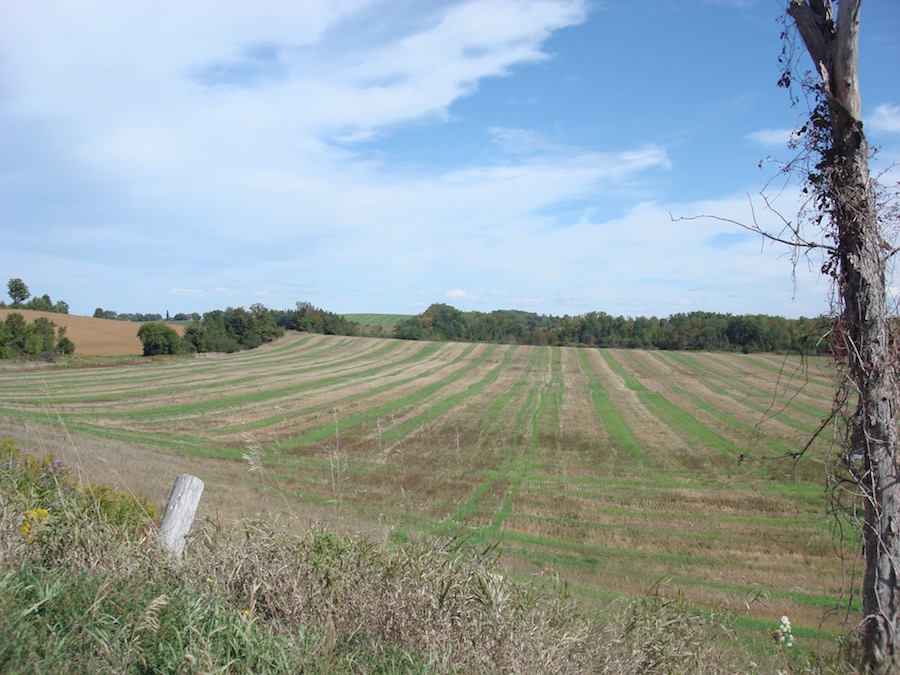 BUT WHAT DOES ALL THIS MEAN TO YOU AND ME?

Soil removes and separates (sequesters) Carbon and stores it to keep it from escaping into the atmosphere where it is released as Carbon Dioxide (CO2).

Healthy soil, full of organic carbon is our ally against climate change.

We need to keep carbon stored in the soil because the more organic content in the soil, the greater its potential to store carbon.

We cannot feed people if our soil is destroyed -

HOW ARE WE KILLING THE SOIL?

- “waterlogging" -excessive irrigation of soils  that are poorly drained for agriculture.

HOW CAN WE FIX THIS? 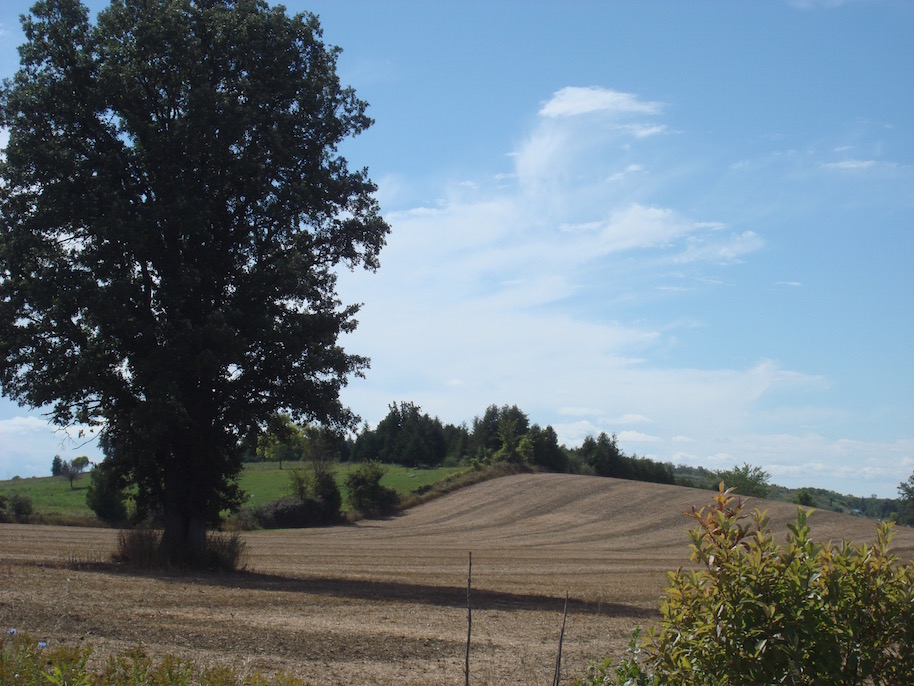 - As farmers and gardeners, we can decrease disturbing the soil by tilling it less.

-Can you see how the soil in the field on the right is more open to eroding than the green one in the background?

- We need to build up organic matter in the soil because it can hold 18-20 times its weight in water while recycling nutrients.

If we added only 1% of organic matter into the top six inches of soil, it would hold approximately 27,000 gallons of water per acre.

- Keep the soil covered with rotating crops and plant material - called ‘cover crops’ and by using mulch in our home gardens.

If soil is covered all the time with living plants, it has an amazing ability to enable micro-organisms to feed the roots with nutrients, while reducing moisture loss through evaporation and lowering the temperature of the soil… which reduces plant stress.

This is also true in our own gardens.  We are the stewards of our land… no matter  if our plot is a few hundred acres or a few square feet . 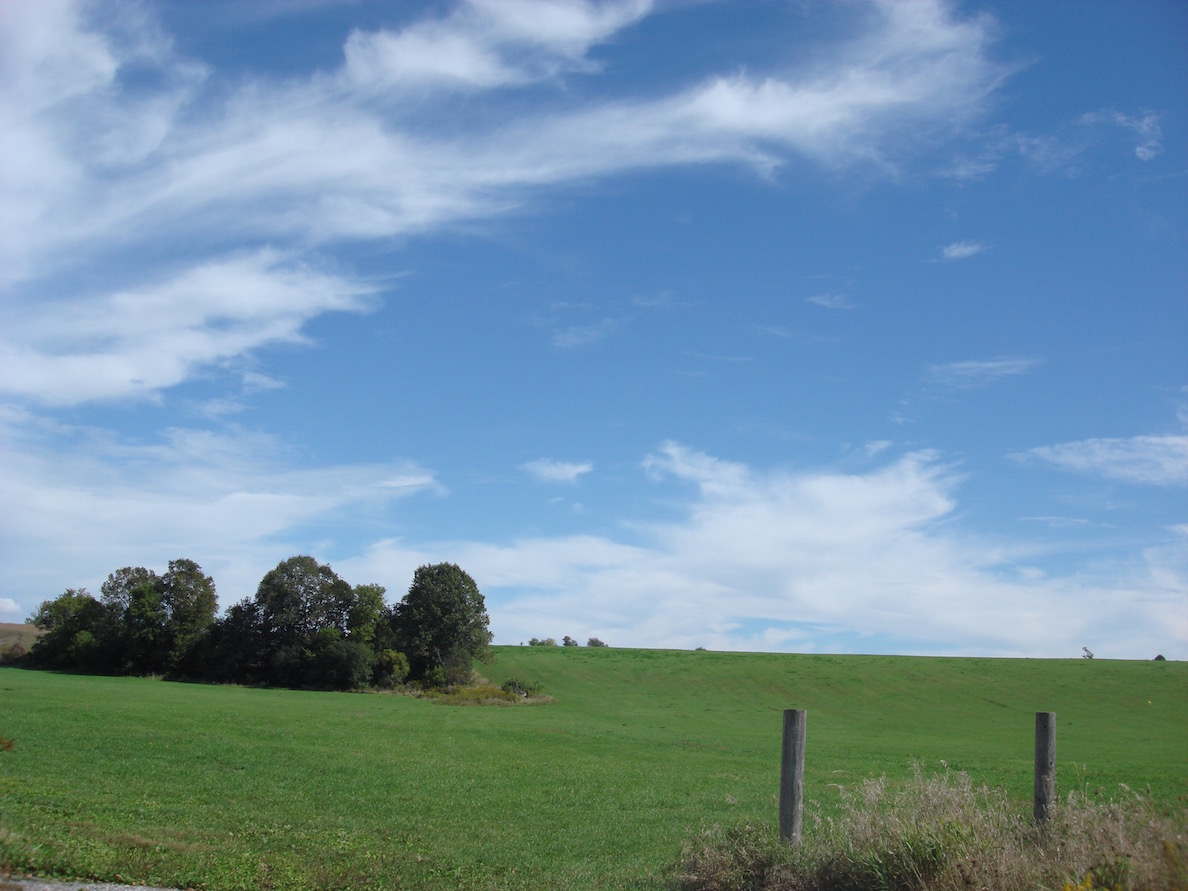 SO WHAT CAN WE DO?

You may notice gardens that are full, like the traditional English garden, are relatively free of weeds. ( the proliferation of other plants usually chokes them out or at the very least, hides them).

Weeds (and their seeds) will grow where the soil is bare. Most of us spend so much time pulling every last weed, leaving lots of space between our plants.  If we do not add at least 3 or 4 inches of mulch to  bare soil,  weeds will be back in a matter of days…

Cover the soil; with plants, compost or mulch.

Mulch will not eliminate weeds entirely, but will keep the soil covered  and moist.  Compost will keep the nutrients intact, giving your plants the best chance to grow and be healthy.

If you have a larger vegetable garden than most of our city spaces have room for…. there are some good ideas here: www.rodalesorganicllife.com - see “Cover Crop Basics”.

What does it all mean for us as gardeners?

FEED THE SOIL - NOT THE PLANTS

If our soil is poor,  hard-packed and heavy with clay, water won’t drain away and will pool on top of the soil.   I am always tempted to dig and break up the clumps - it made me feel like I was making a difference.

With my research, and experience, it only made things worse.  Please don’t dig up your garden unless you really have to - there are times when you  may have to change the level, or remove stones and rocks, but remember this:

There are weed seeds that have lain dormant for many years…. dozens of years in fact…. just waiting to be disturbed - digging makes them grow - but more critically, it destroys the micro-organisms that are so necessary for other plant and soil health.

Spread your compost on top of your soil….. take a garden fork and push it down in random places… so you have some holes throughout your beds; rather like aerating it. Rain will wash the nutrients into the soil…

If you are planting, instead of digging the whole bed, dig a hole for each plant…even if you have to take a pick-axe to do it.  Make the hole a bit bigger than the plant, add back the original soil with a little compost, plant and add mulch...

Over a season,(or maybe two), the roots will soon be strong enough to break down the soil around the plant. Those hair-like roots use the fungi and mycorrhizae like adding small straws to their ends, extending them into the soil, seeking out the nutrients that are between the spaces in the soil which will then alter the soil texture naturally.

And when you water plants, be sure to hold the hose or watering can down at the root.  Water less often and deeply and never from above. It is the root that needs the water and the soil, not the leaves.

In the fall, leave your garden standing…. let all the green go back to the root to give the plant strength to endure winter’s freezing temperatures. Let Nature keep the nutrients cycling through each season. 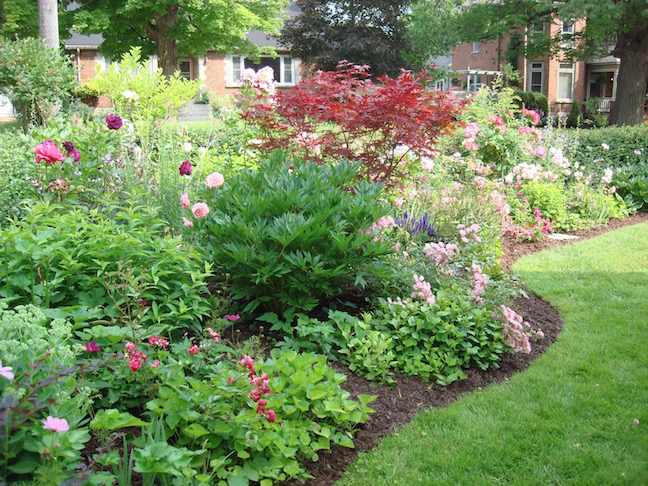 In the book “Deep Rooted Wisdom”  are many suggestions for creating gardens that need little or no watering, repairing damaged soil, and lists of plants that create healthy soils without fertilizers.

We need to nurture and protect our soil.

This is a huge issue.  But we can start with our own gardens.

DO Be the change.

DO Cover the soil

FEED THE SOIL - NOT THE PLANT

Thoughtfully consider soil as a valuable resource because:

“No civilization has outlived the usefulness of its soils. When the soil is destroyed,

the nation is gone.”