Groundhogs and  Raccoons are Pests too.

Critters like Groundhogs and Raccoons are garden pests too- not just insects (see OTHER PESTS) - nevertheless, for 4-legged pests, see what a mess they made for me!

These Critters destroyed my garden !

Two weeks before the local garden competition, I took my morning coffee to the garden to see how things were progressing and imagine my shock to find my Sandcherry eaten by some pesty critter.

Alas, it seemed that someone else liked my garden but had a very different vision for it! Not beauty, but EATING! All my Petunias are chomped down to the ground… no more flowers, just sticks and the Pansies? the same.

My Sandcherry had only a few leaves left !!! And then there was the beautiful blue Campanula my daughter bought me…. mowed and chomped to the ground…

I was sick… I actually cried. (oh, and swore like a sailor while I stomped around the garden shouting rude things at the pests who had already had breakfast, lunch and… dinner). 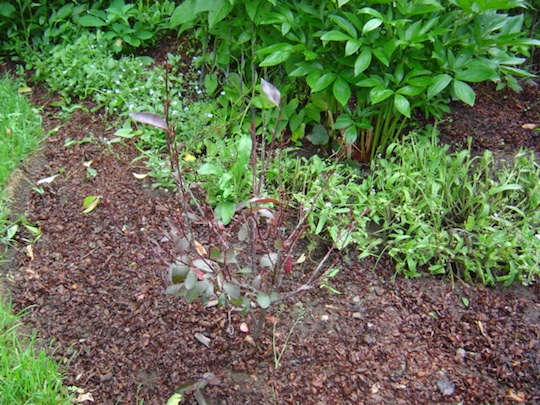 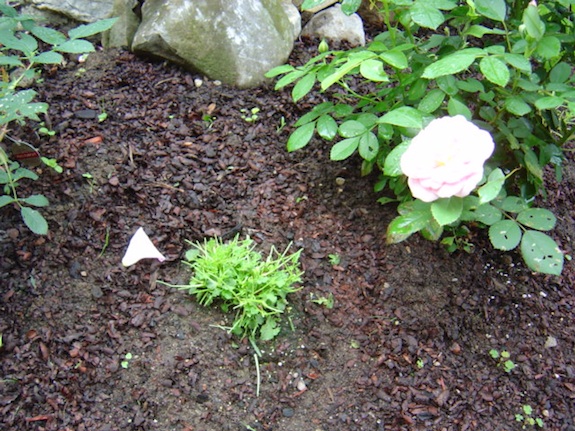 And my poor Campanula !

My neighbour had seen a groundhog the evening before.  He didn't have a garden so he thought it was so cute.  HA !

My particular garden pests were Groundhogs (some folks call them ‘Woodchucks’) – and by the way, Wikipedia says “……… the name woodchuck is unrelated to wood or chucking. It stems from an Algonquin name for the animal (possibly Narragansett), wuchak. “

Groundhogs are also known as  ‘whistlepigs’ because when they are disturbed or sense danger, they stand erect and  make a whistling noise.  I actually have never heard that whistle but ‘they’ say it is true.  Their nature name is Marmota monax…. And are considered to be a rodent…. Like  very large ground squirrels or marmots.  They are common all over Canada and the US and up into Alaska.

These cute little pests can grow quite large (I am sure mine would have, eating the way they did )… they can weigh as much as 9 pounds and grow to  be 24 or 25 inches long… whew..  if groundhogs live near alfalfa fields, they really get big.. as much as 30 pounds and can be over 30 inches long.

With their heavy curved claws and muscular build, these industrious pests dig burrows to live in and they actually have two fur coats….a thick undercoat and an outer longer grayish one that gives them that kind of frosted look.

They mate in the early Spring and sometimes have 4 or 5 little, blind hairless babes.  They are not really family folk as they throw their young out of the burrow by early July.

That being said, this will give you an idea of how much damage these pests/groundhogs can do in a short time, and if they kick their young out that soon, think how much more damage your garden will have to take….instead of providing for their family, they send them out into our  gardens to eat themselves fat….

This was getting to be  serious business.  I am not a hunter, and I live in the city, so that was out. And a big fence? Not that viable for me as they lumber on down the railroad  track and into the garden…. They can climb  trees too, did you know that?  I didn’t. So fence or not, they travel their fancy highway and have their choice of gardens while waddling their way to mine.

Whatever the history, I still had a problem...Panicking isn't really my style, so I called several pest control guys.  One said $150 each - to trap them and take them away but he would not guarantee he would not dispose of them -  yowza - I didn't like the sound of that... it was unacceptable.

The next was "Trapper John" who said it would be $60 for each one he trapped and took away.  Better, but still… I was pretty desperate by then so agreed.

Trapper John became my most frequent caller over the next week.  Besides, he did not laugh at me (to my face at least).

He did warn me that those cute groundhogs could be very vicious and not to let my doggie into the garden.. one more reason, says I.

Doug Schwartz, a zookeeper and groundhog trainer at the Staten Island Zoo - says "They’re known for their aggression….. [Their] natural impulse is to kill ’em all and let God sort (it all) out. You have to work to produce the sweet and cuddly (ones)." I just wanted the pests out of my garden… not to make them sweet and cuddly pets.

Trapper John came and set up traps around my garden shed where there was some obvious burrowing.  He assured me he would not harm the critters but he would have to take them far away and across a body of water so they could not find their way back.

Those groundhogs were bold enough to let me see them scurry under my shed.,… nervy.  First he brought good fresh lettuce from the market - Trapper John using only the best he says....but the critters were not fussy on the lettuce because they still ate my petunias.  Then he went to the garden centre and brought his own peturnias… pretty funny… but it worked.

The French Roadside cross on the side of the shed takes on a whole new meaning! 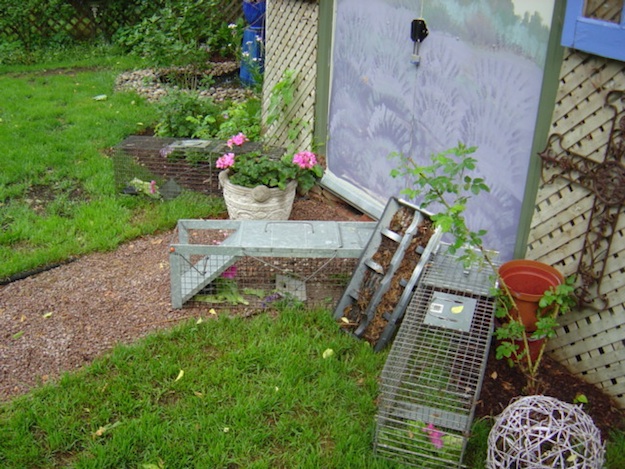 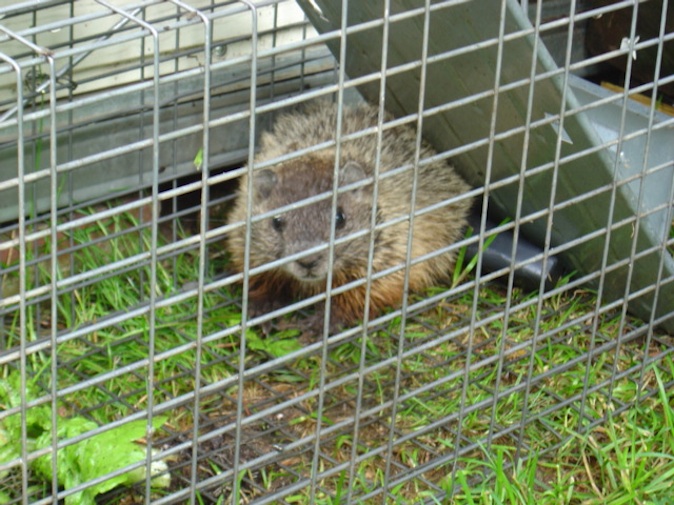 LOOK AT THIS FACE!

How could anything so sweet be such a pest and do so much damage? 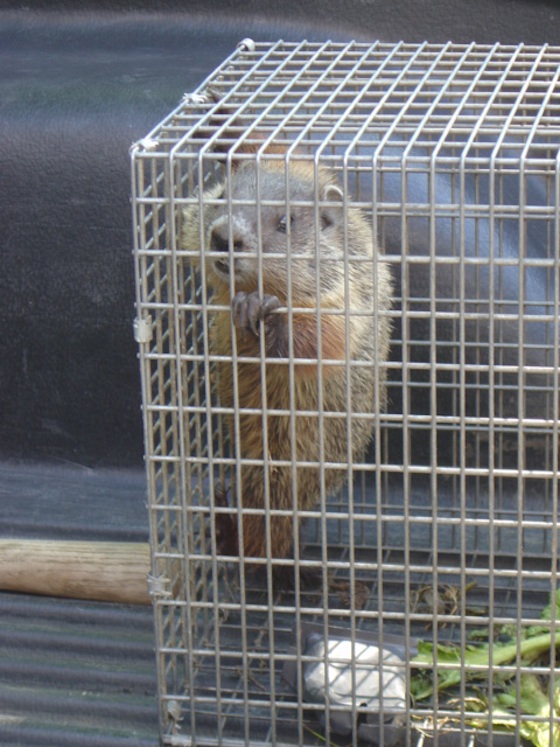 And this one below?  How adorable... I almost lost my nerve. This little darling captured my heart.. I was astounded at how we seemed to look into each other's eyes…. I almost changed my mind and let him go…but Trapper John arrived just in time.   He assured me he took them all to the same place so they could all be together.

Are there angels for groundhogs? I think there must be. 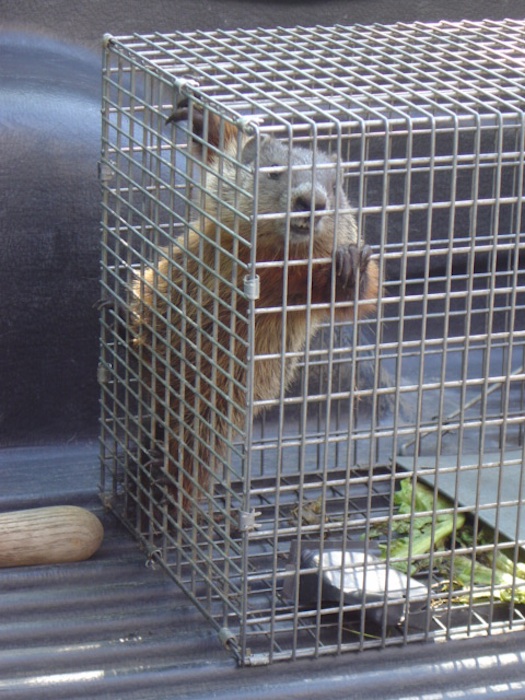 Cheeky little pest - but so cute ! 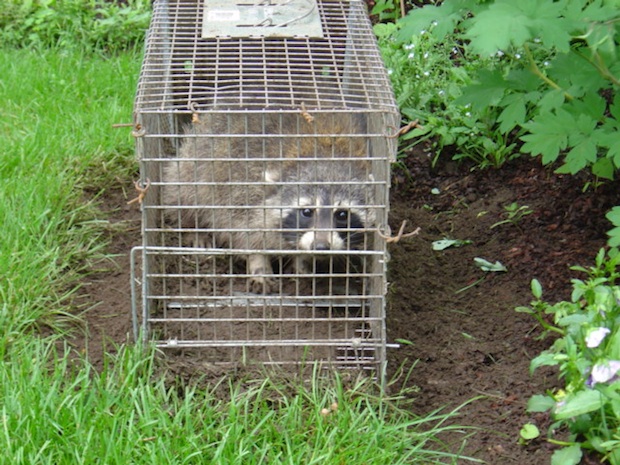 ..and this raccoon was huge.  Trapper John said it must have weighed 40 pounds.  He was mad (the raccoon, that is).  See how he is digging all around the trap? what a mess!  He dug up all the grass! 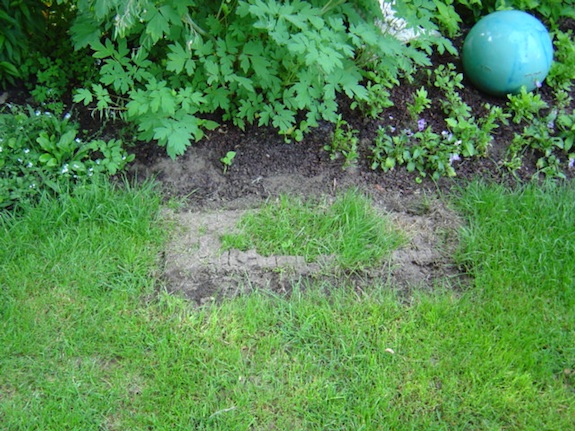 Oh my, he was  cranky and so was the second one. I guess I might have done the same.  Traps are only good for the trapper, and not the trapped.

Trapper John got to leaving me notes each day….. one said "I was here at 12:40 and removed the 2nd groundhog -  John" (and a smiley face)..very funny.

Oh, I forgot the best (or worst).  One morning there was a SKUNK in the trap. Thank Goodness for Trapper John who came on a Saturday, covered the trap with a tarp and carted poor "Pepe-le-pee-yu" off to the woods.

Now that the groundhogs and raccoons were all gone, and instead of pulling out of the competition, I decided to repair and replant. In spite of the critters and what they cost me - it was worth it... I came in first!!

This year? I have no groundhogs…

Instead, I have a rabbit - well, he or she eats my garden so, who has who? At any rate, bunny rudely ate his way through the garden in the winter - he ate the Sand Cherry to within 3 inches of the ground, all the rose canes including the thorns, the violets, the Campanula… but not the petunias… I put them in the window boxes.

Last time I saw him, (a ‘her’ would never eat MY garden) he was on the deck, sniffling around my daughter’s Basil and tomato plant,… in the dark..

Haven’t seen him since I scolded him.  I sent him to my neighbour’s yard and told him she has a lot of grass to cut.  He hopped over to help her out and he hasn't returned.