Pruning Trees and Shrubs
....why & how to prune

In Ontario, in early March, although there may still be lots of snow, it is time to start pruning:

What exactly is pruning?:

The University of Minnesota says this:

“Pruning is a horticultural practice that alters the form and growth of a plant. Based on aesthetics and science, pruning can also be considered preventive maintenance. Many problems may be prevented by pruning correctly during formative years for a tree or shrub”.

Why Do We Prune ?

...what about pruning roses?

"The best friend on earth of man is the tree: when we use the tree respectfully and economically we have one of the greatest resources of the earth".

When Should We Prune?

In early March, (= “late winter or early spring”), and even with 3 feet of snow the snowbanks could still be 6 feet tall.

So, pour another cup of tea and wait a bit...

It is easier to see the shape of a tree or shrub when there are no leaves and then decide when and what to prune.

Prune before new growth happens because any pruning wounds (open bark) will seal over more quickly.

NOTE:  trees do not heal, they seal.

... and they do a good job by themselves.

In the past, arborists used a tar-based sealant to cover a cut branch wound.

But research shows this can actually delay the tree’s natural ability to seal the wound.

There are some exceptions:

When we prune living tissue, we put the tree into some shock, depending on how hard we prune.

Pruning shoots and branches with live foliage slows and often stops ROOT growth because the tree is now attempting to replace those branches we just removed.

So best to prune during winter dormancy.

Do NOT prune between April and October to avoid Oak Wilt.

If you have to do some pruning during these months, you must apply a wound dressing that masks the odour of freshly cut wood - because the beetles who spread Oak Wilt, love that smell.

...if they must be pruned in summer, do not choose a rainy or humid day as this can increase the risk of ‘stem cankers”

“Disease symptoms include dieback of affected branches, reduced foliage, yellow foliage, premature fall coloration and early leaf drop. Cankers (areas of dead tissue) are found at the base of trees, at branch crotches, around wounds or on branch stubs.

Cankers can range from slightly flattened surfaces to distinctly sunken areas with large callus ridges at the canker margin. Areas of stems and branches with thin bark may have a red-yellow discoloration.

The condition of the bark and cambium (the tree’s growth tissue, between bark and wood) can indicate the presence of a canker.

Infected bark and cambium will be loose and wood beneath them may have a dark, wine-red to yellow discoloration instead of a normal white or light color. The reddish color associated with the center of honeylocust stems is not related to these diseases”.

When to prune these:

Even though pruning in late winter is most often recommended, for apple trees, you may be pruning off the fruiting wood.  So take only the dead, dying or diseased wood and save the hard pruning for the summer after they bloom (without cutting the new little apple growths).

There are many good videos by fruit farmers that show you how.

Sometimes, pruning in the spring or summer can increase the chance of disease such as the bacterial “fireblight”.

Pruning encourages new sprouting, so pruning in fall or early winter can cause the cut sites to die back - an early frost can kill off any new sprouts.

Fireblight is a systemic,contagious disease. The term "fire blight" describes the appearance of the disease, which can make affected areas appear blackened, shrunken and cracked, as though scorched by fire.

Primary infections are established in open blossoms and tender new shoots and leaves in the spring when blossoms are open.

Honeybees and other insects, birds, rain and wind can transmit the bacterium to susceptible tissue. Injured tissue is also highly susceptible to infection, including punctures and tears caused by plant-sucking or biting insects

Once deposited, the bacterium enters the plant through open stomata and causes blackened, necrotic lesions.

When to Prune Sap trees:

These trees, like sugar maples have sap that starts flowing in early spring. If pruned when the sap is flowing the tree appears to bleed. This doesn't do a lot of harm, but it is better to prune once the leaves are fully out.

Remember not to take off more than 1/4 of the live foliage as it is too stressful for the tree to replace those branches and work on its roots too.

When to Prune Flowering Trees:

Forsythia (when it blooms, prune your roses)

These early bloomers (spring and early summer) will send out flowers on LAST YEAR’S wood,

Prune these AFTER they finish blooming, otherwise you will prune off the buds that are meant for the next spring flowering.

If you HAVE to prune an early flowering shrub, leave as many branches with flower buds and prune only if the branches impede walking or parking. Save the rest for post-flowering.

If you prune summer-flowering shrubs late in the summer or early fall, you are likely to stimulate new growth that might be too tender to survive winter.

When to Prune Shrubs

These shrubs  are usually planted for their foliage, and not necessarily for their blossoms, so prune them in early spring before any growth begins.

Shrubs that bloom on new wood, should be pruned before any growth begins such as Annabelle Hydrangeas: cut these back to the first or second pair of buds above the ground.  The stems will be stronger to support their large heads.

I like to cut Annabelles - (Hydrangea arborescens) back in a staggered manner - especially if they grow next to a wall…this way the blooms cover the bush in layers rather than all at the top.

Clematis and shrub roses should be cut back to live wood.

Spirea - the old-fashioned kind that grows out of control and often seen in hedges, spilling over sidewalks and gardens. They can be cut almost to the ground every few years to bring back healthier bushes. It may not bloom the first year of hard pruning, but most likely will the second year. 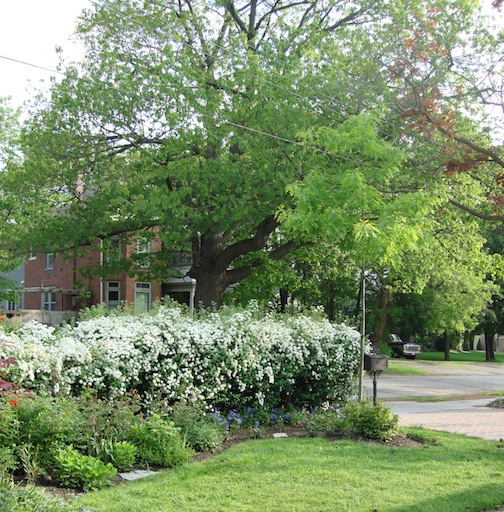 This Spirea Hedge above, full of white flowers, spilled over the garden and the city sidewalk.

On the left above, I cut back the hedge in very early Spring - with my secateurs (hand clippers). It was time consuming and I took a lot of kidding from my neighbour who hacked the top of his off - with electric shears.

I cut out all the dead stems to the ground, (they tend to be greyer, and brittle and will often pull out of the ground with little effort). I then cut the other stems in a staggered manner so the foliage would grow up along the canes, or branches, all the way to the top.

On the right above, this is the hedge the end of June (seen just above the garden to the right of the Japanese Maple).  Very few flowers (until next year) but lush and healthy.

My neighbour's hedge? all the new growth was at the top and bare stems at the bottom.

Now you know when to prune and the tools to use…let’s get into the How of it all.

There are two kinds of cuts:

Are for Shape: Cut a branch back to a bud that faces - or heads - in the direction you wish it to grow.

For these cuts, prune just 1/4 of an inch above the bud and slope your cut down at about a 45 degree angle.

Are for Health:Take out any dead, diseased, damaged branches or those that cross or rub against another

Some interior branches can be cut to the ground bringing in more light and air to the centre, creating a fuller, more dense growth. 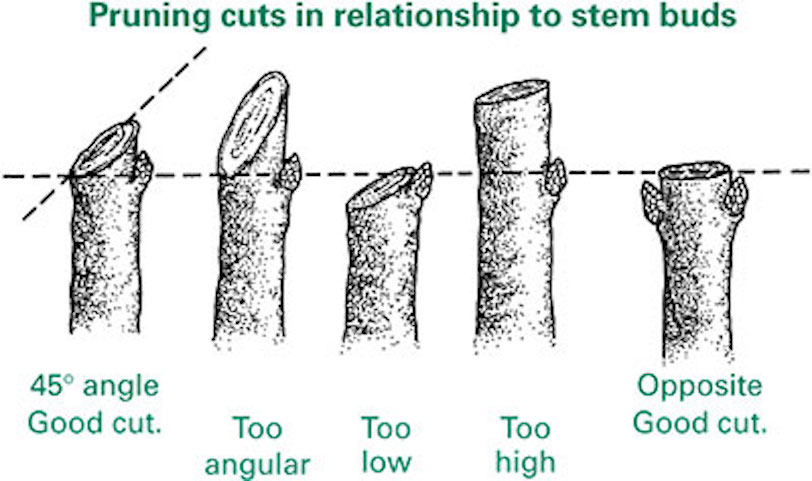 Next, remove all suckers or water-sprouts (the ones that grow straight up- making the tree look like it has a bad haircut) - (they syphon off the nutrients that the tree and roots need).

Take branches that  cross and/or rub on others -and those that grow toward the centre of the tree.

Although you will need some growth in the middle, too much will keep air and light from the tree - trees need air, light and water in order to pass the nutrients to the roots.

Never cut or prune the leader- if there are two, remove the one that is least likely to contribute to the overall shape and health of the tree but only if the tree is young and the cutting will not kill the tree.

Then, before you do one more cut - step back to see where you should go next….

Remove branches that are too close together

Leave those with the most potential to add to the shape, strength and structure of the tree.. 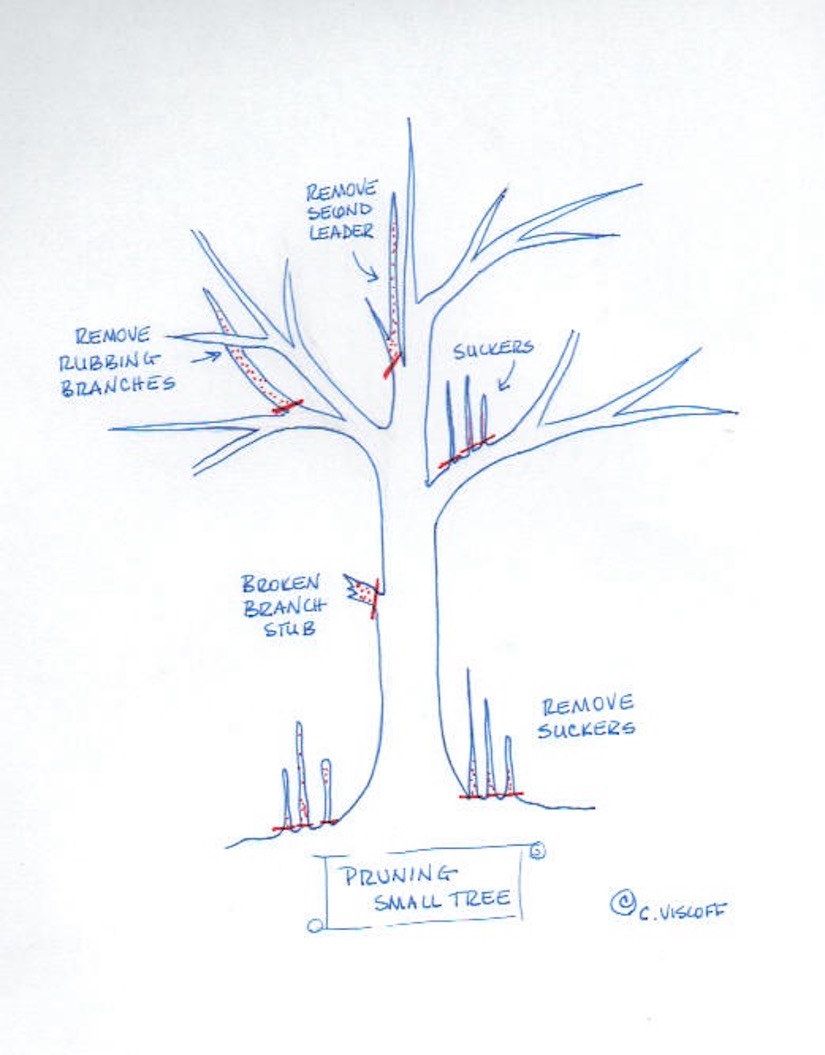 SOME OTHER DO’S AND DON’TS

Do not put any type of paint on a pruning cut.

It will not prevent the cut from rotting or decaying, nor does it promote  healing…

Tree cuts do not heal, they seal…

If the cut is made properly, the tree will take care of the rest.

Do not “top” trees - when you remove those large branches from the top of the tree, you not only harm the tree’s natural shape, you decrease the living leaves which promote photosynthesis needed to gather nutrients that feed the tree’s roots.

Take off only one-third:

This way the plant can keep renewing itself with as little stress as possible.

Electric shears work well and quickly, but they bruise and tear leaves.  Even if you trim the top of your hedge regularly, it will not produce more growth from the bottom and the flowers will be only at the top.

Trimming off the top, cuts off the flowering buds and encourages thick foliage which will shade the bottom and the interior of the hedge.

The inside will become woody and dead with fewer and fewer flowers. (Spirea, especially).

Privet and Spirea will come back vigorously when pruned almost to the ground every 4 or 5 years, and will bloom again.

A few last words of advice:

Pruning is an art.  Anyone can "trim" a bush, but to prune for health and shape is a special skill.

You can learn to do it yourself, but if you don't have time, then hire someone who prunes by hand.

Electric trimmers are used for trimming.

Hand pruners, of course, are used for pruning.

If you intend to hire someone, be sure to ask how they do it exactly and make sure they do as you ask.