Why Barns Are Painted Red? 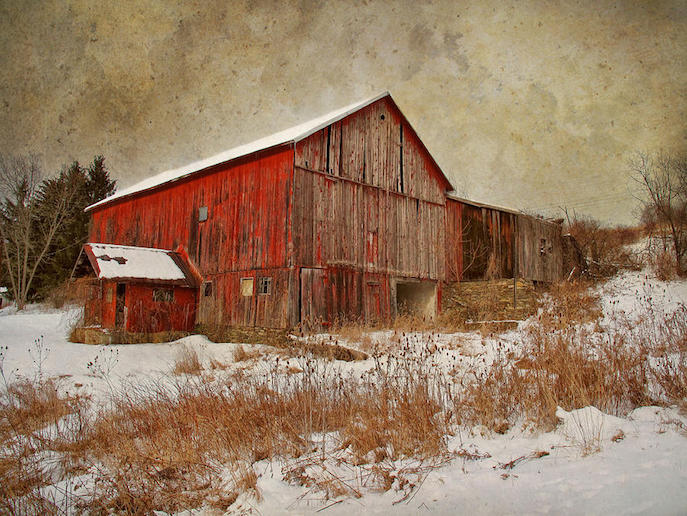 This beautiful and haunting photograph is by Larry Marshall who caught not only the beautiful red colour, but the feeling of this barn.

See more of his work here -

Why are barns red?

My daughter asked me this years ago, and I told her because it was my favourite colour, and my dad’s.  She knew that was true and as I didn't really know why barns were red, and computers were not in my vocabulary, I didn’t look any further and she never asked again.

Recently I read a decade-old article in a magazine answering another’s same question.  It brought back memories of car rides, the questions; and oh, the incessant questions.

Now after all these years, I have an answer for her and I doubt my dad knew this - even though in my eyes, he knew everything.

There are some who say when European farmers wanted to be sure the barn's wood was sealed against decay, they used the oil from flaxseed (linseed oil).   My dad, who made furniture often mixed his linseed oil with milk and once, lime - to mimic the old finishes.  So did farmers because they used what they had on hand.

Some others say that if the farmer had cattle he slaughtered himself,  he used some of the blood to mix with the linseed oil - this eventually turned a dark red and not the bright red we see in some newly painted barns.

Although this is a popular thought, there are others who say it was the American Indian who used animal blood for painting interiors - that it would not last outdoors and so used clay, along with the whites of wild turkey eggs and turkey blood.

I am not sure why one animal’s blood would work and the other not - but I wasn’t there.

Around any farm, was a lot of rust (ferrous oxide) and because it inhibited the growth of some fungi and mould, it too, was added to the mix.  Moss, mould and fungi kept moisture in wood and caused it to rot… not what you want in a large barn made of wood.

When commercial paints were available, most barns were already red, and so that colour became the most plentiful and inexpensive until whitewash entered the picture and became cheaper still.

In spite of the barns I have seen in Ontario, not all barns are red across the land.  Red is most popular among the farms of New England, and New York along with the areas along the Great Lakes, and Michigan.

Yellow barns popped up in Pennsylvania, green in Virginia’s horse country and black in the Bluegrass region of Kentucky.

It seems logical that the red barns came with the settlers from Europe and stayed.

What, you may be asking, do red barns have to do with gardening?

We, like farmers are ingenious in using what is at hand to make something we need. We mix household ingredients to save our roses from bugs and such; we weave trellises from twigs pruned from willows; and we fashion pots from anything that holds water.

So the farmer and the gardener have much in common.  We bring flowers from the woods to pretty up our sheds (or barns); we put roses over wire fences to hide the plainness.

And some of us (like my dad)  paint the handles of our garden tools RED so we know they are ours and we can reclaim them from the borrower.